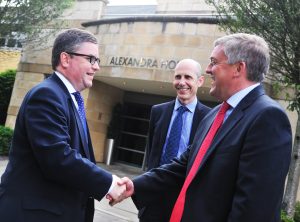 On Friday 22 July 2016, Robert Buckland, MP for South Swindon, visited a business in his constituency to congratulate the team on its success in winning and delivering a major government contract.   Wroughton-based Improve International  is one of the UK’s fastest-growing veterinary training and development companies.  Founded by vet David Babington 18 years ago, it now operates in 15 countries, offering post-graduate training to vets, vet nurses and practice support staff.

In 2014, Improve International won a major contract from the Animal and Plant Health Agency (APHA), an agency working on behalf of the Department for the Environment, Food & Rural Affairs (Defra) and the Scottish and Welsh Governments to safeguard animal health and welfare and public health.   The contract is for the training and revalidation of Official Veterinarians (OVs) in England, Scotland and Wales.  An OV carries out work on behalf of Government, such as disease surveillance and monitoring the import and export of animals.  Two years on, the project is running smoothly with positive feedback received both from OVs and APHA.

Improve has also increased the learning opportunities available to OVs through the creation of  a unique annual OV conference and exhibition, which takes place this year on 29-30 September at the Alexandra House Hotel.  It has also launched a regular magazine called The Official Veterinarian.

In 2015, Improve was acquired by Benchmark Holdings Ltd, a Sheffield-based company operating in the global aquaculture, agriculture and animal health sectors.

Commenting, Robert Buckland said:  “I’m delighted that Wroughton is home to one of the UK’s fastest-growing veterinary training and development companies.  It was good to meet the team at Improve International and to learn more about the vital work that they do to train Official Veterinarians to safeguard animal health and welfare and public health.  I congratulate them on their achievement on winning and successfully delivering this major government contract.”

David Babington MRCVS said:  “We explained to Robert what we’ve achieved so far and how we are working with APHA to raise the standard of training to Official Veterinarians, who play such a critical role, both in helping to maintain the health and welfare of farm animals but also in helping those of us who are pet owners in key areas, such as the preparation of Pet Passports.

“We are proud to be based in Swindon and find that its ease of access to London and Bristol make it an attractive location to our veterinary delegates from across the UK and, increasingly, from Europe and beyond.  Since we joined forces with Benchmark Holdings last year, we have started to grow even more strongly and are diversifying into a range of new areas so the future looks exciting indeed.”

Is our website easy to use? Does it have all the information you need? Tell us what you think.

If you have feedback on our training or other services or need assistance in any other way, please contact us.